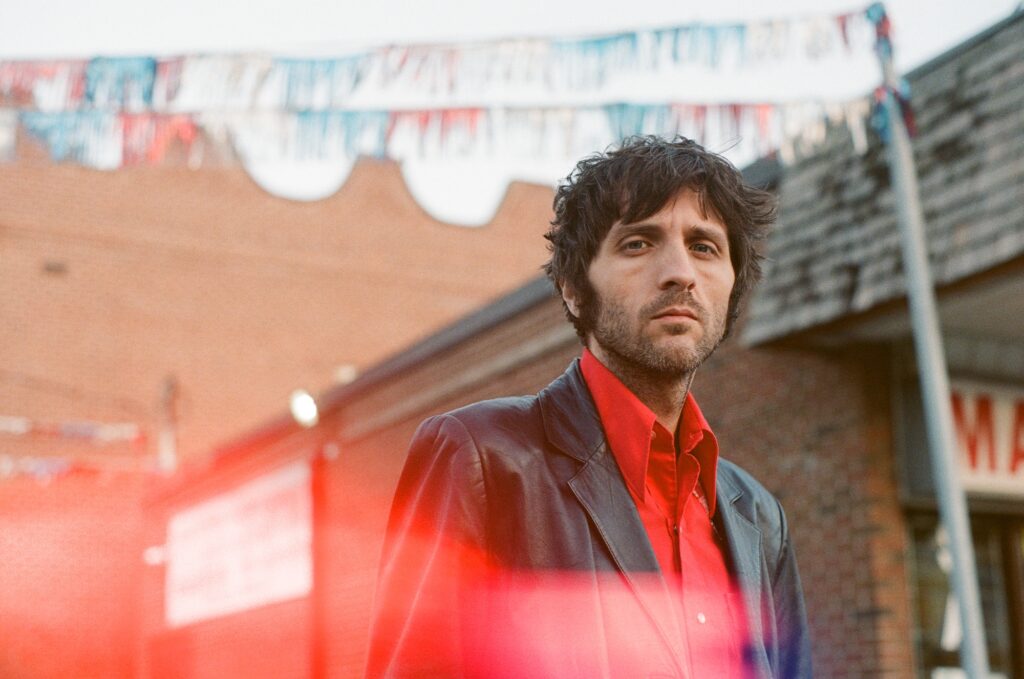 “Time Out For Tomorrow is the upcoming album by Jerry Leger and the 3rd in a row that I’ve had the pleasure of producing. In my opinion it’s the most precise example of his craft and vision so far. It’s lean, mean and a beautiful collection of songs and sounds.”
– Michael Timmins, producer of Time Out For Tomorrow and founding member of Cowboy Junkies

“Jerry Leger has that spark in him that all the great songwriters have. He’s the real deal.”
– Ron Sexsmith

“Time Out for Tomorrow has the compelling stories and great energy that I’ve come to rely on from this talented and prolific songwriter. Take the time to listen to Jerry Leger!”
– Doug Paisley

Jerry Leger has a thing for ghosts. The Toronto singer/songwriter confirmed it a couple of years ago when he went on a personal journey to explore many of Ontario’s largely unknown ghost towns, having been inspired by the writings of historian Ron Brown. Leger has immortalized one of those towns, Burchell Lake, on his new album Time Out For Tomorrow, containing 10 portraits of the impermanence of life, love, or simply catching a glimpse of a shooting star.

Yet, other ghosts reside much deeper in Leger’s songs. Whether they’re the voices of Roy Orbison, Lou Reed, Gene Clark, Rick Danko or Ronnie Lane, they naturally complement the universal truths at the core of Jerry Leger’s music, along with his undying faith in rock ‘n roll as a way for all people to find common ground.

Time Out For Tomorrow continues Leger’s run of consistently high output and displays the finely honed artistic vision that has been evident since 2005 when, at age 19, he released the first of nine studio albums, along with three more with his side projects The Del-Fi’s and The Bop-Fi’s. It’s added up to a body of work that was recently celebrated with the European-only compilation Too Broke To Die, aimed at Leger’s growing fan base in Britain and the EU.

Most of those listeners didn’t discover Leger until his 2014 album Early Riser, his first with Michael Timmins of Cowboy Junkies handling production duties, as well as the first to be released on the Junkies’ label, Latent Recordings. The combination of Timmins’ capture-the-moment production aesthetic and the Rolling Thunder-esque chemistry of Leger’s longtime band The Situation (plus a few special guests) now appears unbeatable. And although Time Out For Tomorrow may not be as expansive as Leger’s previous Timmins-produced effort, the acclaimed 2017 double album Nonsense And Heartache, its more concentrated dose of everything Leger does best is just as potent.

“I got the name for the album from an early ‘60s dime store collection of science fiction short stories a friend gave me,” he explains. “Everything around me seems like science fiction these days, and the phrase ‘Time Out For Tomorrow’ fit these songs and my mood in one way or another.”

In highlighting some of the album’s key moments, Leger points to the opening track “Canvas Of Gold,” on which he sings, “Everything was almost decided when we were young, you’ll stay poor like your family before and I’ll keep hustling.” It’s a reference to Toronto’s well-known gentrification projects in recent years that have put tremendous pressure on the city’s artistic communities. Jerry adds, “Close to where I live there’s a condo development starting at $400,000 called ‘The Poet.’ I don’t know too many poets who can afford that. I’m living in a time that is harder and harder to do what I at this point involuntarily do. What I have to do.”

He also takes aim at tensions stoked by hate groups on the inspiring “That Ain’t Here,” another seemingly endless battle in which artists have been forced to engage. However, the mood on Time Out For Tomorrow often abruptly shifts to showing off Leger’s genuine love of early rock ‘n roll, as evidenced by the gripping ballad “Read Between The Lines.”

“I originally wrote that one for The Del Fi’s, but many people I played it for convinced me to keep it for myself, so I did,” he says. “It has a great energy and feel, and I think this album more than any of the others really succeeded on getting the perfect feel for each tune. It’s hard to do; usually the songs come across better live, but I think with this record we managed to capture that spirit.”

In keeping with his love of all things vintage, Leger is a voracious vinyl collector and notes that when recording Time Out For Tomorrow, the two albums he was listening to most often were Lou Reed’s Coney Island Baby, and Nick Lowe’s The Impossible Bird. He says their influence had more to do with the overall sound he wanted to project rather than any specific musical or lyrical content.

“Coney Island Baby was the first solo Lou Reed record I heard, probably around age 14, and I’ve always loved it,” he says. “The production just glides along and really puts the focus on the words. My song ‘Justine’ on this record benefited from that the most.

“I got into Nick Lowe through Elvis Costello, and with The Impossible Bird, there’s a real brightness to that album—the sound just makes me feel good when I hear it. It’s the same feeling as when I throw on an old Everly Brothers record like ‘Cathy’s Clown.’ It gets me out of a depression every time, even though it has depressing lyrics! I wanted Time Out For Tomorrow to have that same kind of open arms sound to it while still presenting lyrics about the human condition for better or worse. I think my song ‘I Would’ is one Nick Lowe might dig.”

Indeed, other songwriters of Lowe’s caliber, such as Ron Sexsmith, and outlets such as Rolling Stone, PopMatters and the Toronto Star have sung Leger’s praises. He’s also shared stages with The Sadies, Justin Townes Earle, Deer Tick, Dawes, and others, along with making his debut at Holland’s Take Root Festival in 2018 alongside Neko Case, Kurt Vile, Father John Misty, Shakey Graves, and Alejandro Escovedo.

Canada may be known more these days for punching above its weight in the global pop music field, but its long and storied tradition of singer/songwriters refuses to die. Jerry Leger is carrying that torch, and if there’s any further proof needed that he’s at the vanguard, just listen to Time Out For Tomorrow.